Generic steps involved in execution of an SQL Query

How an SQL Query is executed by a Database Management System?

Primary storage (it is your RAM) also called as Primary Memory, Main Memory, Memory, etc. All of us know that the Operating System brings all the files needed to be processed into main memory first. A DBMS too actually maintains database in number of different files. A DBMS have many modules for managing data and executing queries. Among them two modules are given in the Figure. They are Query Processor and Storage Manager. These two in turn have many sub-modules in them (they are not discussed here directly).
After receiving the query, the Query Processor module does the following;


Upon receiving the instruction from the programs that executes query in DBMS, the Buffer Manager (which is part of Storage Manager) does the following;


As a whole, we can define the major roles of these two components as follows;
Query Processor – identifies the cost effective plan to execute a query.
Buffer Manager – tries to reduce the number disk I/O between disk and main memory.

It is your hard disk where all the files are stored. Basically, hard disk storage units are divided into tracks and sectors physically. Operating systems treats the basic data units as Block, which is collection of one or more contiguous sectors. And, when transfers files from disk to main memory, operating systems handle them in units of blocks. The data transfer rate of hard disk drive is several orders of magnitude slower than that of the main memory. This is where buffers and Buffer managers are helpful in handling the data very efficiently when they are needed. Disk subsystem is the system which consists of disk controller and set of disks. It handles disks for disk I/O.

With this introduction, let us discuss the process with an example query in the following section. 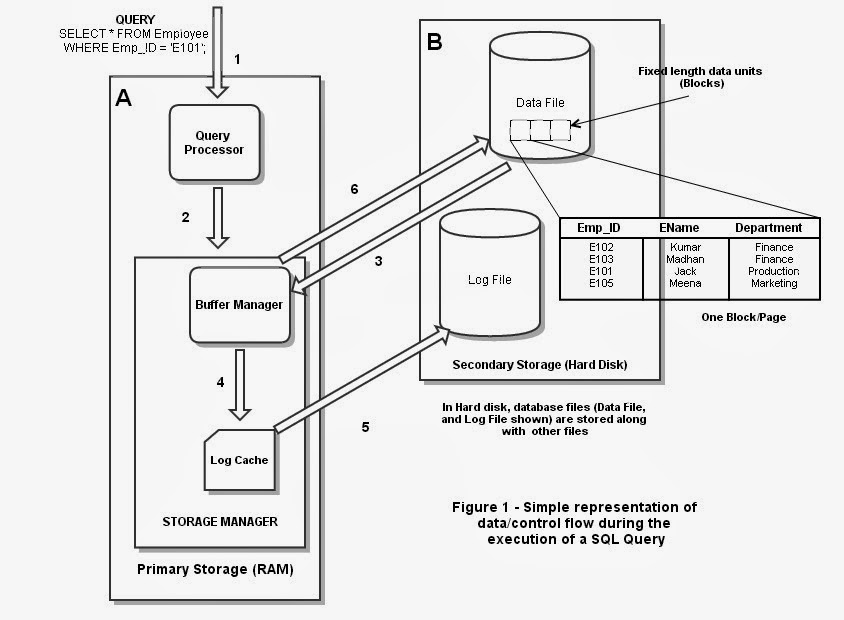 Let us now discuss the control flow for executing the given query,
SELECT * FROM Employee WHERE Emp_ID = ‘E101’;

The query is given to the Query processor module through any one of the various SQL interfaces (SQL tool, Application programs with embedded SQL, etc.)

Query Processor verifies the syntax of the query.
Then it checks for the correctness of the table name Employee and the attribute Emp_ID in the Data Dictionary. Also, it checks for the user authentication. That is, if the user is privileged to access the requested data.
It generates various possible equivalent queries (relational algebra equivalents) using the meta information (for example, size of the table, keys of the table, integrity constraints, indexes on various fields, and much more). For our query, we could write the following relational algebra expression;
σEmp_ID = ‘E101’(Employee)
As mentioned above, using the indexes we could generate many other equivalent queries.
Finally, it chooses one expression as execution plan for the given query. Let us assume the above relational algebra expression is chosen to execute the given query.
Now the instruction is given to the Buffer Manager to fetch the data needed by the query.

Selection query is processed as discussed. If the query involves UPDATE operation, then the other steps must be included. For example, let us consider the following query;
UPDATE Employee SET Department = ‘Marketing’ WHERE Emp_ID = ‘E101’;
For this query, fetching the required data from disk to main memory is done as discussed above. But, to ensure the changes made to the data to be reflected in the database permanently, we need to follow the other steps too as discussed below.

If the query actually changes the data (i.e, if the operation is UPDATE), logging the changes made to the data is an important step. This ensures the safety of data from abnormal loss of data.
If an entry of changes is written into the Log cache (which is actually one of several caches handled in Buffer), it also written into the Log File which is available in the disk.

Once the data is successfully written into the log file, it is time to make the actual changes and write the updated record into disk. The modified data which is available in Buffer and not yet written to disk is called Dirty pages. When a successful log write is completed, then these dirty pages are written to disk and treated as clean pages.
As discussed above, one of the major goals of a database system is to minimize the number of disk accesses. Hence, it is decided by the Buffer Manager to retain the data in the buffer according to several algorithms.

By Saravanakumar Kandasamy - March 09, 2014
Email ThisBlogThis!Share to TwitterShare to FacebookShare to Pinterest